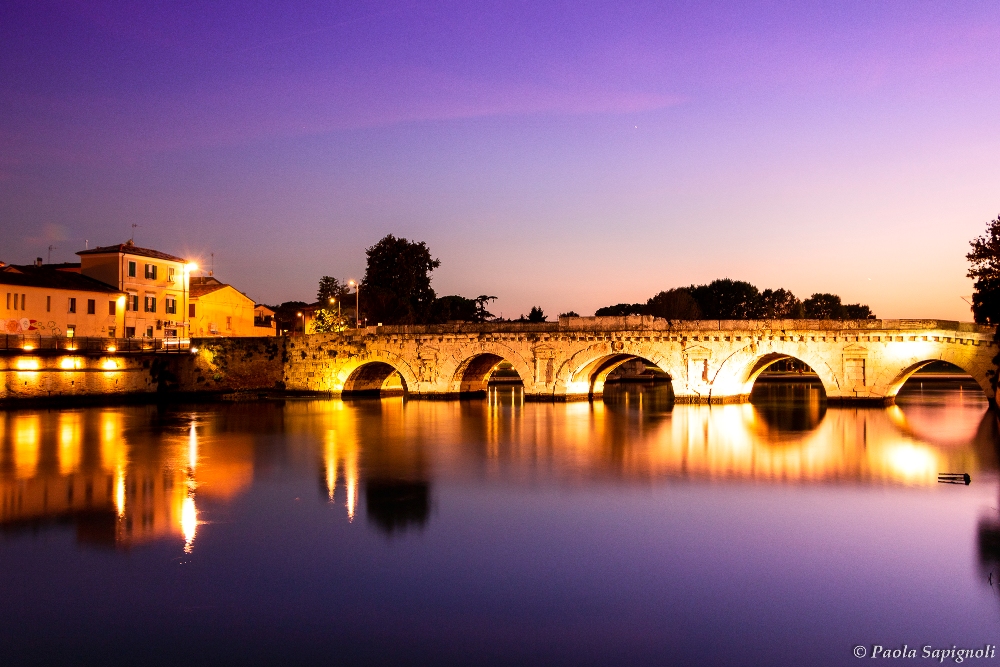 Rimini makes us think of the sea, colourful rows of umbrellas and pedalo, crunchy piadina (a Romagnola flat bread), night time fun, discotheques, parties on the beach. But few know the true spirit of the city.

The historic center is Rimini's pulsing heart with lots of monuments, churches and findings from different epochs, some of which are still intact and completely fascinating.

The origins of Rimini are very old. The first primitive settlements date back to the Paleolithic age and then to the presence of peoples like the Gauls, the Etruscans, the Greeks, and the Samnites. But the very foundation of the city of Ariminum was in the Roman age, 286 B.C. to be precise.

The close encounter with Rimini starts by going through the historic center, where it is possible to admire the Arch of Augustus and the bridge of Tiberius that commemorate the splendour of two great Roman emperors, but where it is also possible to discover the perfect geometry of the monuments related to the period when the Malatesta were the lords of the city: the Malatesta Temple with works of Giotto and Piero della Francesca and Castel Sigismondo transformed by the powerful strength of citizens into a fascinating exhibition attraction.

It is also possible to discover Rimini and its past, from ancient times to today, by visiting the Museum of the City (“Museo della città”) that has interesting work interesting works and the house ("Domus") of the surgeon, a home dating back to the Roman age that was recently discovered and is full of exceptional mosaics and some of the oldest surgical and pharmaceutical findings in the world.

In addition to the streets and characteristic alleys of the historic center, some places, like the “piazzetta della vecchia pescheria”, have become evening meeting spots for young people. Next to the old stone stands where fish was sold, trendy night clubs and fascinating hang outs were created.

In Rimini, there is the time for markets and local street markets; the general market takes place every Wednesday and Saturday morning in Malatesta Square and Cavour Square, while for antique lovers, it is every Friday evening.

And Fellini's Rimini?
Even that deserves to be remembered and discovered:
from I vitelloni to Amarcord the city was often the source of inspiration for the great director.

In Borgo San Giuliano, near the Bridge of Tiberius, it is possible to find that atmosphere that was typically spoken of by the great Fellini and to admire colourful Murales, created by painters from Rimini, that represent his films and his life.

Rimini is also the land of the Malatesta that give the curious visitor enchanting glimpses, castles, fortified towns, millenary churches, sweeping olive groves and vineyards. A land with lots of history, flavours and colours that may be admired thanks to the many excursions organized in coaches with departures and arrivals in the vicinity of the hotel; for instance just to name a Gradara, San Leo, Sant'Arcangelo, Montebello, Montefiore,Mondaino, San Marino.